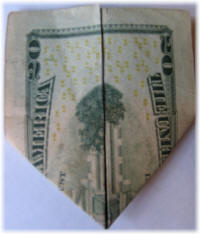 I once read a story of a planet inhabited by colonists sent from Earth to avoid a global cataclysm. All of the people received an implant at birth that prevented them from pursuing lines of thought that could lead to the development of mechanized warfare. After many millennia, they had sophisticated technologies that provided them an advanced modern society. When it came to developing something dangerous, for instance, the wheel, it just never occurred.

In the story, several people discovered that when solving a problem through its logical stages, an obvious next step failed to occur. An individual would just think they reached a dead end. Only as a group did they realize the illogical, that the obvious next step was denied them. I don’t recall if this realization enabled them to override this programming, only that they became aware of unseen forces controlling them. Like most science fiction I read, maybe this is more science than fiction.

Shortly after the events of September 11, 2001, someone discovered that when folded in a particular way, U.S. currency displays images of the occurrences of that memorable day.

The revelation of this did create some short lived curiosity among people and then faded off into the realm of trivia. Reactions were generally: that’s weird, how could they know, or the events must be a conspiracy planned years in advance. Some thought it purely coincidental, like seeing Jesus on a potato chip.

I would have thought the logical reaction would have been headlines in the press, congressional inquiries, and a field day for investigative journalists. It would have been as if the Martians had landed. Alas, Martians, feel free to visit undisturbed.

Where did the obvious questions go? We should want to know:

Was it perhaps an origamist playing in his wallet?

Did someone know beforehand and wait to publicize it?

Who revealed it to the public and how?

How do I know? (many still are totally unaware)

When was the artwork commissioned and by whom?

Was this a message planted by time travelers?

These questions remained unanswered and are rarely asked.

My initial response was that this is proof of time travelers. In a way, I still believe this to be the case, but find the answer to be much simpler.

I once heard that our existence is both sequential and simultaneous. One day, I’ll tell the story of “The Drill Press” in which I’ll tell how we can change the past as easily as the future.

There is no mystery to the mysterious money, we just decided it to be so. The mystery is why, as in the science fiction story, we are not curious.