Excitement came over us; we were going on vacation! We were going to Yellowstone National Park over the Memorial Day weekend. It was already Spring in Northwestern Montana. Tulips were blooming and the air was getting warm.

We were disappointed to find out that Yellowstone was going to have some pretty unpleasant weather. Travel could be dangerous and parts of Yellowstone might not even be open! Luckily, upon looking it up on the internet, Mom found out that the roads should be open.

We went to AAA, to request tour books and maps. After browsing through a Yellowstone tour book, we found a motel with cabins and liked the idea of sleeping in a cabin.

Later that evening, we packed our bags and got ready for the trip. We went to bed that night, knowing that we would need to get up very early, at around 3:30 a.m.!

Anxious about the trip, we couldn’t sleep and woke up earlier than planned, around 2:00 a.m. Our house was so cold that night; we were nearly unable to move.

We quickly got dressed, but our parents took a long time in their bedroom. At last, Mom came out and fixed us a quick meal. After we ate, we started to pack food for the trip. Finally, at 5:00 a.m., we started out on the road.

The day was cloudy, cold, and rainy. E was very disappointed that it was so dreary. She had hoped for a hot, sunny vacation. At around 6:00 in the morning we ate some yogurt as we rode along. We drove along the roads, and saw many sights such as slopes covered with boulders.

We took a rest stop at a diner in Missoula, a relatively large city in Montana. Afterward we continued on our way. When we were getting near Butte, Montana, our vehicle ran low on gas. In the wilds of Southern Montana, there are very few gas stations, so we were quite worried that we would run out of gas before a gas station was reached. The tank was almost empty!

Tension mounted as the gas level dropped lower and lower. After a few tense minutes, we finally reached a gas station. While Dad was putting in gas, Mom and we went into the store to get Life Savers. Dad came inside the truck stop to tell us that the pump wasn’t working!

Luckily, we made it across the street to another gas station. After we got our gas, we continued on our way. We rode along the highway for a long time. As we drove through Southern Montana, M pondered how the people living in this place got gas for their vehicles. If they went out to get gas at one of the faraway gas stations, by the time they got back home, more gas would be needed.

We drove, and drove, for many more miles, until we reached Gardiner, MT. Gardiner is a very small town near Yellowstone. Gardiner really looked like a place made for tourists. Mom took a photograph of us standing by the Yellowstone sign. We were anxious to get into Yellowstone National Park.

“When are we going to start seeing bubbling mud pots?” E asked.

“When we get in Wyoming, will it look different?” inquired M.

It did look a little different in Wyoming, and we soon saw bubbling mud pots. When we arrived at Mammoth Hot Springs, we got out. E wanted to stop there. M got into her new hiking boots, which she had gotten only days before. A view at Mammoth Hot Springs

We walked the Mammoth Hot Springs trail. Then we looked at the beautiful Grand Canyon of The Yellowstone. M & E found it extremely spectacular. M thought it was as beautiful as the real Grand Canyon in Arizona.

We headed to Yellowstone Falls. We walked down the steep, yet short trail to the overlook. M found the falls huge! It really impressed M with its enormousness.

The overlook was hovering over the falls and if you jumped over the edge, you would go down the cascading green waters to a nearly certain death. The water was crystal-clear and a beautiful emerald green in color.

There were Japanese people with garbage bags over them to protect themselves from the rain. E was only wearing her sandals, and she was truly miserable.

We also looked at some other thermal features.

One of these was Dragon’s Mouth, which was quite scary, as it sounded like Godzilla was emerging from it. You could even see waves from Godzilla’s footsteps coming out of the cave. From there, we walked along a boardwalk through a pretty wooded area.

The snow falling gave beauty to the landscape. Although it looked pretty, the weather was cold and miserable. M&E only wanted to get out of the cold. M hoped to get a nice motel room with a hot tub.

Upon getting to the cabins where we were hoping to stay, we found out that they were still closed for the season! M was a little worried that we would have to sleep in the truck. But, we observed that there were cabins at the Lake Hotel. We hoped to get one of the cabins. Mom said to have good vibes, and hope for a room.

Obviously, our good vibes had done their work well. It was in a yellow cabin town at the Lake Hotel. The cabin had two beds and was very nice. E was glad that we got such a pretty cabin.

That evening, we took a walk to the General Store. On the way, we saw a buffalo standing in the road. We approached it. M&E were afraid that the buffalo would turn angry because all of the people were passing it. It could charge at us! Fortunately, we made it past the buffalo safely. At the General Store, we bought souvenirs for our relatives.

We stopped at the hotel for a while and purchased some postcards. Later we went back to our cabin, wrote our postcards, and went to bed.

Early the next morning, we left our cabin, and walked out to a field near Yellowstone Lake where some photographers were taking photos of elk. We saw an elk running away, then a grizzly bear. M was nervous. The photographers ran away.

We stood in front of the field where the bear was running around and watched. Since we did not have bear spray, we got into the truck. Then we saw two bears, but they disappeared.

We saw a man walking into the woods where the bears had disappeared. Dad yelled, “Bear!” The hiker didn’t appear to hear Dad’s shouts. We never found out what happened to the man; did the bears kill him?

Then we went to Old Faithful Village, and saw the famed Old Faithful. E enjoyed watching the geyser as snow blew into our faces. On the other hand, M hated the snow blowing in her face. She thought blowing snow was the worst kind of snow.

Near Old Faithful, we saw a buffalo skeleton. Did the dangerous geyser kill it? We walked around the boardwalk, and saw the Morning Glory Pool. E had really wanted to see its gorgeous blue water and yellow border. Next stop, West Thumb. The snow started coming down so hard at West Thumb, we decided to put on our snow bibs. One of the sights to see in this area is a fishing cone. A sign explained that when you catch a fish, you dip it into the cone. When you reel your fish back in; it is cooked.

Cold and snowy at West Thumb.

Next, it was back to Old Faithful Village, where we waited for hours out in the cold, to see Grand Geyser. Grand Geyser is the biggest geyser in Yellowstone National Park. The weather was miserable, and it was snowing hard.

We sat around for approximately 2 hours with many other people waiting for the geyser to erupt. No one knew for certain whether or not Grand Geyser would erupt at all.

Finally, after a long and cold wait, the geyser erupted. It went high into the air. On the way back, we walked another boardwalk. It was so snowy and foggy we could not see anything except people, but we could smell the odor of rotten eggs. This is the smell of Yellowstone National Park. 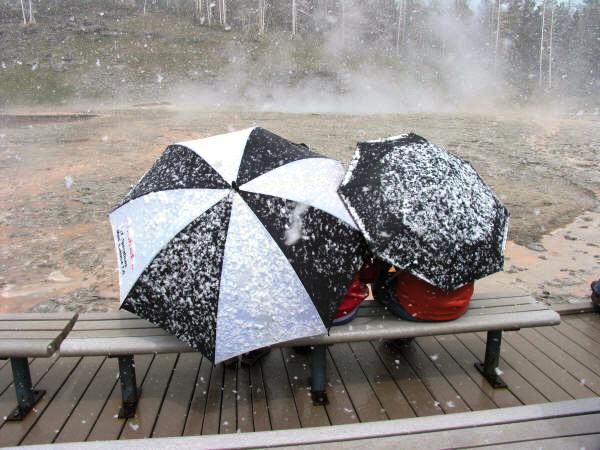 Tourists endure a snow shower waiting for geyser to erupt.

As we were leaving Yellowstone, after all of the snow and misty weather, it turned sunny near the exit of Yellowstone National Park. That was nice, because we saw the true scenery. E thought the mountains looked so lit up; they were amazingly gorgeous. She was a little disappointed though, that it got sunny right when we were leaving. 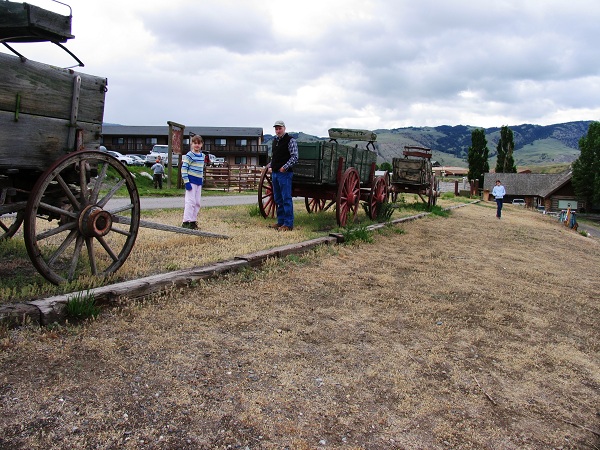 A view of Gardiner, Montana

We got a motel room in Gardiner, Montana. Next to the motel, was a corral with horses. M found the city of Gardiner interesting because it was designed like a cowboy town, boardwalks and all! M thought that the scenery in Gardiner was spectacular. The hills were so pretty; they gave M a good feeling. We ate at Outlaws Pizza. After spending the night, we continued home.

In Bozeman, we went to the Museum of the Rockies. 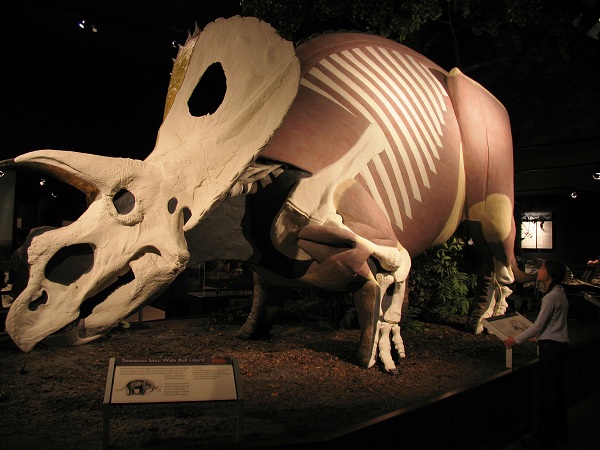 Museum of the Rockies

To see A Miserable Day in Yellowstone video, click here.

For more information on Yellowstone National Park visit their website.