The first snow of the season is always exhilarating.   Freezing snow and wind blew in our faces as we hurried inside. The gal at the entrance said something like, “My goodness! Look what you’re wearing,“ when she saw E in a summer dress with no leggings on her bare legs.

I smiled and then walked over to the tire center to set up my seasonal tire change. The job would take about an hour and a half, so we got a cart for something to hold on to and appear like shoppers. Most of the time, we walked up and down the isles of Costco trying to look inconspicuous as we waited for pizza and cookie samples to come out of the microwave.  Who says there is no such thing as a free lunch?  We thumbed through some books and came across an article about the ghost town of Nevada City, Montana.  It said that the Nevada City Hotel is haunted and that people hear footsteps in the hallway, even when no one else is there.

I didn’t hear any footsteps, but I will tell you that as soon as we arrived in Virginia City, which is adjacent to Nevada City, Mallory and I could sense that something was peculiar about the place. It wasn’t a foreboding, mind you, just an eerie feeling that permeated the town. I couldn’t quite put my finger on it.

In the 1860’s, Virginia City and Nevada City were thriving. Gold had been discovered in Alder Gulch and gold miners came to hunt for the precious metal.  Not only did the gold rush bring honest people and families, it also brought the outlaws. They were known as  “road agents”.

The roads in and out of town were full of these bandits. They would rob and kill innocent people for their gold. Things got so out of hand that townsfolk got sick of the lawlessness. They used vigilante justice and began hanging men for robbery and murder.

The book also said that heavy footsteps can be heard on the boardwalks in front of the old miners cabins in Nevada City.  The night we slept there, I didn’t hear any heavy footsteps along the boardwalks.  However, I did consider the fact that we were deep into bear country and that the windows were so low to the ground that a bear could easily break in if he wanted to. 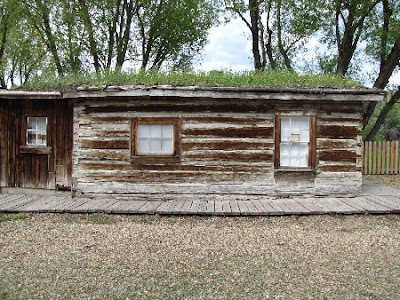 The next morning we found out that near our cabin was a small building that had been used to imprison George Ives.  Ives had been tried and convicted of robbing and killing a popular young German man.  Ives  was hanged for his crimes.  Thus began the era of the Montana Vigilance Committee which brought law and order to these gold mining towns.

My retelling of this visit to Virginia City and Nevada City seems spookier than the actual visit there.  Although, Mallory and I concur that it was a feeling like being in the Twilight Zone.

I find it fascinating to read old letters and diaries from the past. Here’s one dated September 27, 1865.

“Two men found hanging in the air” this morning up the gulch a little bit with a card on their backs on which were the words ‘Hung by the Vigilance Committee for being road agents”‘ from the Road to Virginia City – the Diary of James P. Miller.

One thought on “The Ghost Towns of Virginia City and Nevada City, Montana”