My April 1st post about UFO Sightings in and around Kalispell  started me thinking about our road trip in the fall of 1999 to Roswell, New Mexico and Rachel, Nevada. M and E were toddlers and David and I traveled as much as we could at that time. We were seriously looking to move out west and traveling was not only fun and enlightening, it gave us the opportunity to keep an eye out for the “last best place” to relocate our family.


After a amazing visit to the Chihuahuan Desert in Big Bend National Park, we made our way to New Mexico, and, what I call, The Pastel Colored State. We visited several wonderful places on that trip, but this article’s focus is on Roswell and The Extra-Terrestrial Highway.

Roswell, New Mexico is the birthplace of actress Demi Moore, but more importantly, in my opinion, holds the distinction of being the scene of the well-known Roswell UFO Incident – the incident being the crash of an extra-terrestrial spaceship and the recovery of alien bodies.

On July 8, 1947 the Roswell Army Air Field office issued a press release stating that personnel from the 509th Bomb Group had recovered a crashed “flying disc” from a ranch located near Roswell, New Mexico. As one can imagine, hearing the news of a flying saucer created quite a buzz, and the press went into a journalistic frenzy! The next day the Air Force rescinded the statement and said that it was not a flying saucer but a radar-balloon. (Hmm)

Today, much controversy surrounds the Roswell UFO Incident. Did it actually occur? Was there a cover-up by the military?

Many questions remain unanswered, but the city of Roswell, New Mexico has easily capitalized on the UFO phenomenon. Tourists from around the word flock to Roswell to satisfy their curiosity for the unexplained – my family included.

The UFO Museum is filled with alien paraphernalia making for interesting photo opportunities. This is a picture of one of the aliens that was recovered from the Roswell crash site. The alien corpse rests on a gurney, in a glass enclosure, preserved for all the world to see.

Needless to say, I wanted to make memories for posterity and tortured my girls many times by asking them to pose for pictures. In this photo, you see a bewildered looking M and an angry E in front of a display, waiting for me to take their picture. They were such good sports. Who wouldn’t be confused or screaming? Their mother, the most trusted person in their life, made them stand with their backs to a Gray!

After the Roswell UFO Museum,  we continued our close encounters in Rachel, Nevada on Highway 375, also known as The Extra-Terrestrial Highway. Highway 375 is 98 miles long, and parallels Area 51 – the secretive U.S. military base which is known for conducting all sorts of unusual and suspicious activities. The Extra-Terrestrial Highway is in a remote and desolate region of Nevada, in an area famous for UFO sightings. It’s way out in the middle of nowhere, in the dry Great Basin desert with nothing for miles around except the town of Rachel and The Little A’Le’Inn.


Earthlings are always welcome at the Little A’Le’Inn and as I recall there weren’t many of us there on December  26, 2000. After looking around the place a bit – at all of the alien souvenirs and such,  M and E  played pool with some people from outer-space and socialized with a friendly E.T. family.


Outside we took pictures at the UFO Landing Zone, and this photo gives you a good idea of what Rachel, Nevada looks like. Ninety-eight people reside in Rachel and if you like solitude, this may be the place for you. 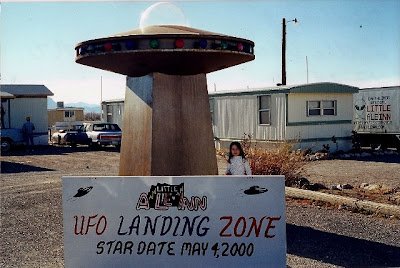 There are no gas stations in Rachel, Nevada, so if you visit – and I recommend you do – just because every out of the way trip is worth it and adds to your experience – be sure to fill up your vehicle’s gas tank and have some extra gas on hand before embarking on the Extra-Terrestrial Highway.

Road trips are the best, and there is always so much to see. And in the case of Roswell, New Mexico and Rachel, Nevada, keep your eyes peeled to the skies, because you never know what you’re going to see flying around.