I’ve been romanticizing about the West for a long time…since 1996 as a matter of fact…or I should say since childhood when I was watching those Marlboro commercials with my granny.

My real fascination with Montana began on a trip to Yellowstone National Park in August of 1998. David, M, E, (M and E were babies at the time) and I had left the Northeast entrance of Yellowstone on our way to the Beartooth Highway.

If you are unfamiliar with the Beartooth Highway, it has been acclaimed by many; but most notably by the late CBS correspondent Charles Kuralt, who said “it is the most beautiful drive in America.”  After reading Mr. Kuralt’s account of the Beartooth in a Reader’s Digest article in the late 70‘s or early 80‘s, I don’t remember which, I was blessed to see it for myself. Don’t miss its spectacular top of the world experience. It is a must see. Add it to your bucklet list if you haven’t taken the drive already. I wish this were my picture but it is not. I don't have any from this vantage point so I got this from Wiki.

Upon entering Montana, we were greeted with this sign saying,

“You are coming into the heart of the West where you will cut a lot of mighty interesting old time trails. Just turn your fancy loose to range the coulees, gulches, prairie and mountains and if your imagination isn’t hobbed you can people them with phantoms of the past.”

YES! I was entering the real American West…a land of pioneers, cowboys, and outlaws.

We kept driving and…

…was advertised next on a storefront in Cooke City. David fancies this one as one of his favorites. It’s like saying get drunk and shoot deer, we have all you need right here.

You have to realize there ain’t much to do in some of these rural towns but drink beer and go huntin’ and fishin‘.  It’s a laid-back kind of lifestyle. 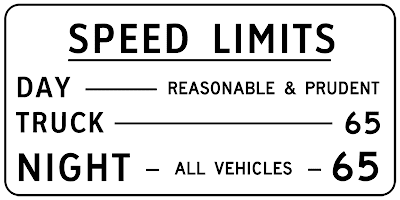 Here’s what Wikipedia has to say about Reasonable and Prudent.

“In the years before 1974’s national 55 mph limit, and for three years after the 1995 repeal of the increased 65 mph limit, Montana had a non-numeric “reasonable and prudent” speed limit during the daytime on most rural roads. Montana Code Annotated (MCA) Section 61-8-303 said “A person . . . shall drive the vehicle . . . at a rate of speed no greater than is reasonable and proper under the conditions existing at the point of operation . . . so as not to unduly or unreasonably endanger the life, limb, property, or other rights of a person entitled to the use of the street or highway.”

Thank goodness I got to see that one, (I had been wanting to) because in May of the following year, Montana established a speed limit of 75 miles per hour. If you care to, you can read more about it here.

Now you may think it reckless to let drivers determine their own speed limit, but you have to appreciate that Montana is so far and wide that sometimes you have to step on the gas to get where you’re going in a reasonable time.

Protect Yourself with Dish Network Get Free Gun

This one has created quite a stir of late but not so much so with the people of Montana and the Bitterroot Valley. According to Steve Strand, the brainchild for this advertising campaign and the owner of the Radio Shack where this rootin’ tootin’ deal is being offered, his sales have tripled since he started the promotion. Nevertheless, Tweeple started Tweeting about it and the liberal media got a hold of it. City folks like to make a big deal out of gun ownership. They think guns have something to do with crime. I think crime has something to do with the lack of moral fiber in our society.

CNN even sent a guy out to Hamilton to do a piece on it. I bet the reporter was giddy with the thought of taking a trip to Montana. It’s the allure of the wild west, you know. Besides, the reporter looked pretty satisfied after a little target practice with his interviewee. I saw him in a video.

Finally, I come to a sign that’s in Kalispell. Well actually it’s on Idaho in Evergreen. I went out to take a picture of it yesterday. What I picture in my mind are old hippies trying to make a decent living in Montana. I imagine they are easy going types with gray ponytails and tattered blue jeans. Perhaps they are well aware of the effects of marijuana and figured the pairing of hot tubs and cannabis would look mighty relaxing to some folks…hence more sales. I wonder if they sell chips and other munchies.

Some people would have the medical marijuana law repealed. I wouldn’t be surprised if some of these same people were popping Paxil everyday…what hypocrites.

Montana…a land of natural beauty and independent thinkers. I hope it stays that way.

See ya out west somewhere,
Marlene