It’s another beautiful day in Old Kalispell. It’s gray and warm at about 37 degrees. The rain that fell early this morning has turned into a wintry mix reminding us that old man winter isn’t finished with us yet. Standing at the kitchen sink I called to the girls to look at the big flakes that were falling.
“Oh, look it’s snowing,” Mallory said with some enthusiasm. I suppose none of us is completely ready to shed the snow.

The 33rd annual Cabin Fever Days and barstool races got under way last Saturday and we were there to join in the fun. It was a family affair with kids of all ages laughing and having a good time. With a Mardi Gras-like atmosphere, there was plenty of food and beer to go around.Lots of people showed up to watch the races and by the time we left, parking spots were at a premium as vehicles lined the roads in and out of Martin City.

City it is not, as it consists of a barroom, two perhaps, and a fire station. People around here say that a town in Montana consists of a barroom and a post-office, of which Martin City does not have. The post-office closed a couple of years ago, I believe due to lack of funds. The good people of Martin City now have to pick up their mail in the town of Hungry Horse. Whether or not this changes their status from “city“, I cannot say.

We arrived shortly before the barstool races were to begin and headed up to Sugar Hill, the main thoroughfare of Martin City. Spectators lined the icy street behind yellow caution tape and security repeatedly reminded the crowd not to lean on the tape and break it as they didn’t have anymore to go around.

Not only was the security tape in short supply, the emcee made an announcement asking the crowd to check their pockets and purses for double A batteries. Theirs was going bad and they needed some new ones to keep the microphone working. I found all of this comical as it reminded me of where I was, out in the middle of nowhere Montana, and why I love it so – not much pretense here. 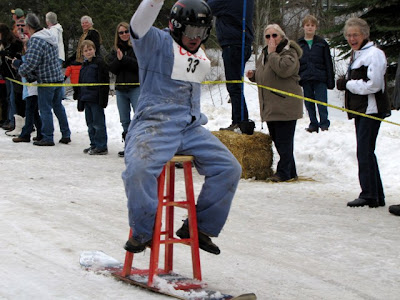 Whoa, this is crazy!

The races began and so did the fun. Revelers cheered and so did we as sleds went by, sometimes a bit too close forcing us to jump out of harms way. And jumping we did when the Sasquatch and the fur trappers canoe came plunging into the crowd and knocking over Mallory. No one was injured, thank goodness, and Mallory caught it all on video. 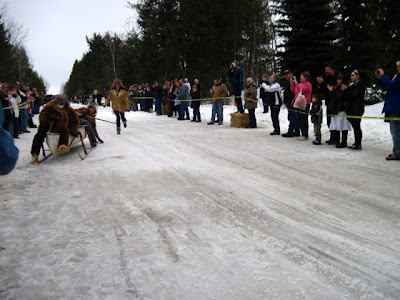 E captured this photo as they were heading right at us! David scooped her up before she got creamed.

Creativity shined in the fashioning of sleds. Aside from the traditional bar stool on skis, there were boat sleds, 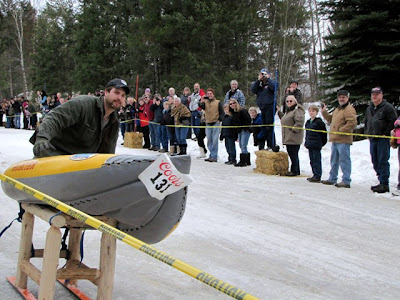 Another one slips past us 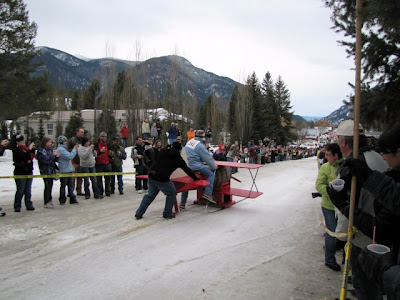 The Red Baron slides his way down Sugar Hill 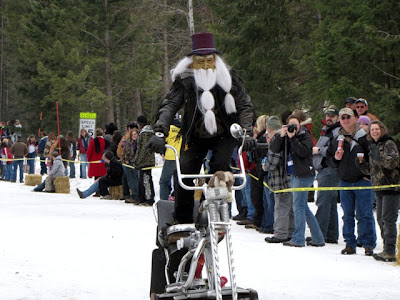 Even the local medical marijuana dispenser company, Golden Leaves, got into the action with their dope, err I mean smoke, spewing contraption. 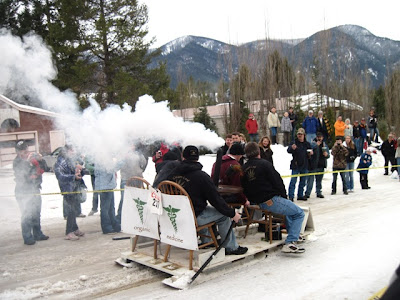 After the sledding contest, spectators ran for hot dogs, popcorn, sodas and beer.

A great day was had by all and I think Doug Burnett summed it up best. He was quoted in the Daily Interlake as saying, “This is one of the funnest things to do in the winter”.