As I got closer, I couldn’t believe my eyes. This was bigger than I had anticipated. It was HUGE. So huge, it reminded me of  FREE day at the zoo or the cops rushing for hot do-nuts and coffee at Mutt’s. As I drove into the parking lot at 8:55 am., it became obvious that parking spaces were at a premium. 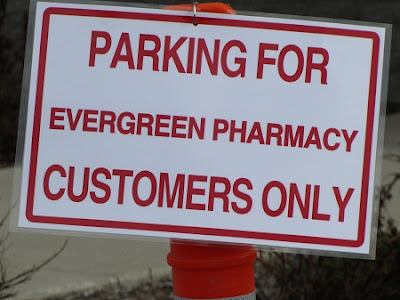 Obviously Evergreen Pharmacy, Movie Gallery, and Little Caesers Pizza were anticipating a crowd. A crowd  for Goodwill, that is. They absolutely did not want anybody but their customers using the spots in front of their stores. I scanned the parking lot and searched for a spot. Black Friday…this was not.  It was the GRAND OPENING of the new GOODWILL store in Evergreen! 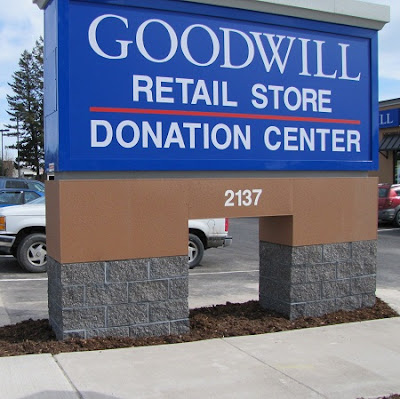 Alas, – there – in front of the now closed Ashley Furniture Store – was a spot. Poor Ashley Furniture. They opened up in the valley during the boom but now the valley is a bust. As unemployment skyrocketed and homes were foreclosed, they had to close their doors. I bet they only wished they could fill up their parking lot the way Goodwill did today. 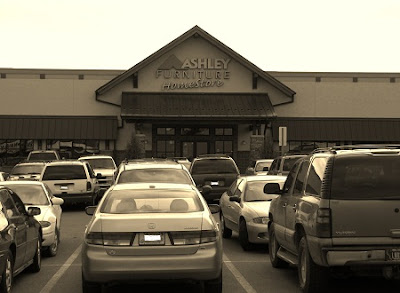 Mallory, E, and I waited in a short line to get inside the Goodwill store, where we were greeted warmly by staff and given a rain check for a tote bag. On the way in, I took a cart. Taking a cart was a big mistake. It was so crowded in the place that if you were pushing a cart it was like sitting in bumper to bumper traffic. I got smart. I returned the cart. Mallory and E went to the jean rack.

I was looking at jeans myself when a young woman next to me exclaimed, “Is that what they want for their jeans!”

She explained that even though they were an expensive name brand, 15 dollars seemed a bit much. I agreed. After that I found a pretty white fleece jacket and a cute hoodie, all for 6 bucks. E scored a really nice pair of boot cut jeans. But Mallory got the big steal of the day with a pair of jeans for 10 dollars. She looked them up on the internet. They retail for 165.00.

Yup, one hundred sixty five smacker roos…for a pair of jeans. She was lucky. I’d have to be a gazillionaire before I would spend that much on a pair of pants. Hmmm, even then, I’m not so sure.

I really wanted to find a good used bike for Mallory to replace the bent up one, but they didn’t have any.

It was hard to shop with so many people looking for bargains. It was time to check out. Oh my gosh! The line snaked around the isles like a giant python. I was so tempted to ditch the stuff and run for sanity, but Mallory and E insisted that they were having fun. Not to be a total party pooper, I gave them some cash and said I would leave and pick up some fruit at the grocery store while they waited to check out.

Twenty eight minutes later, they called to say they were done.

The valley now has three department store sized thrift stores, plus numerous consignment shops. Unlike many businesses that have had to shut their doors in this tough economy, I have no doubt the Goodwill store will not.

Families are stretching the shrinking dollar and trying to make ends meet. It is hoped that the Goodwill store will help revitalize Evergreen where too many buildings stand vacant since Walmart moved out.

If today is any testament to the amount of traffic Goodwill will bring, local businesses should see a boost in their traffic too.

Thanks for stopping by y’all and once again Happy Mother’s Day,

4 thoughts on “Get Ready, Get Set, Shop”