After much anticipation, we arrived at Whitefish Mountain Resort’s base lodge. We were early for our avalanche safety workshop, and explored the brand new lodge. When we went outside again, we saw a ranger standing around a bin of snowshoes. This must be our guide we thought. The K. family was there as well. At last! I recognized some faces. The ranger introduced herself as Leah.

More homeschoolers began to arrive. After everyone bought tickets for the chair lift, we all piled into the dangerous shuttle. It was an open, canopied trailer without seatbelts, pulled by a white truck. The bumpy ride was extremely fun.

After stepping off the shuttle, we were asked to introduce ourselves and state our favorite outdoor winter activity. Then, we followed the ranger to the chair lift. Since we were in a school group, we passed the skiers in line. After mounting the lift, we began to ascend. I was horrified. What if my snowshoes attached to my backpack, fell? I finally began to get comfortable, and enjoyed the ride to the summit.

At the top of Big Mountain, we took our packs into the building. After depositing our backpacks, gathering up a shovel and snow kit, we went outside and strapped on our snowshoes. Leah led the way as we walked along to find a place to dig our snow pits. We would see if the snow was prone to avalanche by examining the layers and stability of our pits. 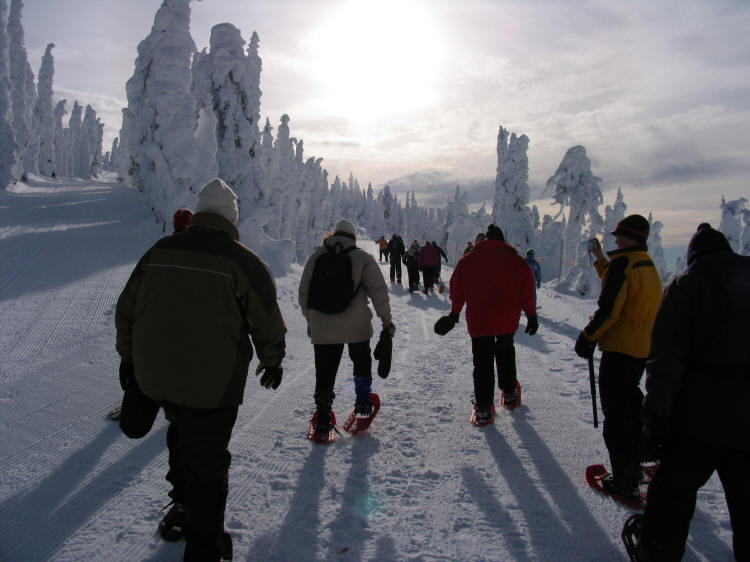 One of the layers is called surface hoar. It is a weak frost that comes on top of the snow. An uncommon type of frost, surface hoar can only be found in certain places, like here in Northwest Montana. Below the frost was a thin layer of ice. Leah showed us the layer of ice beneath the snow. She informed us that if there was too much snow on the weaker layer, then whoosh, an avalanche would come catapulting down the mountain!

Also, we learned about rime ice. The moisture in fog freezes to whatever it hits, forming rime ice. In this case the objects were trees. Leah explained about snow ghosts, which are trees covered with rime ice and surface hoar. Unlike snow, the hoar and ice does not come off easily. So, they aren’t really snow ghosts, they’re more like rime hoar ghosts.

We went a little bit farther, and began to dig our pits in the fresh snow. After making a nice wall, we took out our snow kits, and measured the thickness, took the temperature, and recorded the layers of the snow. After taking down notes, we destroyed our pits, to prevent skiers and snowboarders from getting hurt. The way back was longer and harder than the way there. Finally we saw the summit building. After making it inside, we ate lunch.

Leah showed us her avalanche in a box. It was a plastic container full of flour (to simulate snow), and some plastic trees. A volunteer held an inclinometer, to measure how steep the slope was. The ranger tilted the container until about 40°, when a mini avalanche started. Forty degrees is usually the bull’s eye for avalanches. We observed that avalanches were less violent in the trees. Leah packed down the flour a little, and then the avalanche didn’t slide until about 50°. This showed us that if you let the snow settle, you’re less likely to get caught in an avalanche.

The only thing was that the avalanche was more violent with the packed snow. Leah showed us how probe poles and avalanche transceivers work. You need to stick the probe pole straight into the ground, otherwise you may miss the person that you are searching for, or you could break the pole. The transceiver was fairly easy to use. You turn around until the steady beeping gets faster and then head in that direction. It shows how close you are in meters, so just get as close as you can.

Probing to Find Our Mock Victim

Leah split everyone up into two groups for the next demonstration. While one group tried out the transceivers and probe poles, the other group explored the nature center. First we looked at the nature center. There were soft pelts, interesting skulls, and a display of some stuffed grizzlies, and other wildlife. The minutes passed quickly, and it was time to change sides.

Outside, Leah gave us an avalanche transceiver and probe pole to find our mock avalanche victim. I turned around, looking for the strongest signal. Heading down the hill we got closer and closer to about 1.9 meters. Probing through the snow was harder than you may think. Mom felt something soft; it was our sandbag! Good thing we discovered the person in less than 15 minutes.

Avalanche Workshop Comes to a Close

It was time to head down the mountain. We went inside and gathered up our packs. Everyone headed toward the lift to start the ride down. I remembered how scary it was going down in the summer, on Friday’s, when we would ride the lift for free. Now, still at the summit, it seemed pretty flat and not very scary. Leaving the summit, it looked as if we would just rush down, out of control.

Fortunately the chair did not zoom down. The ride was like a Ferris Wheel. Once the chair lift stopped and bounced a little. That must have been scary for the people that we saw going up past us. We observed that most of them didn’t have their safety bar down. Finally we reached the ground, and boarded the shuttle. The shuttle ride back to the vehicles seemed short. What a fun and informative day!

The base lodge at Big Mountain, Montana

Check out the video here.

Five Red Flags that there may be avalanche danger: